Now, however, another birth control option for men that operates on an entirely different principle has reached an important milestone that brings it one step closer to being tested in human subjects. 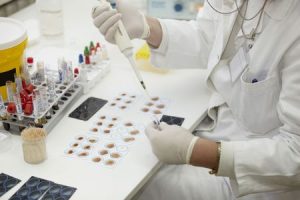 This contraceptive is a non-hormonal chemical compound called EP055 that binds to sperm cells and inhibits their ability to swim, thereby preventing them from fertilizing eggs. Research into the contraceptive potential of EP055 began way back in 2004, after DR. Michael O’Rand of the UNC School of Medicine discovered the protein Eppin, which coats the outside of sperm cells. Following this discovery, Dr. O’Rand and his team began developing a compound that could bind to Eppin and stop sperm from swimming.

Fourteen years later, EP055 has just passed its first round of testing in rhesus macaques with flying colors.

During the test, the monkeys were given high-dose infusions of EP055. Their sperm mobility was reduced by roughly 80 percent within six hours of receiving the treatment, and their sperm was rendered completely immobile after 30 hours. 18 days after receiving the infusions, the monkeys’ sperm mobility had returned to normal. Best of all, the monkeys exhibited no signs of adverse side-effects during or after the trials. Based on these results, the researchers wrote that “EP055 has the potential to be a male contraceptive that would provide a reversible, short-lived pharmacological alternative [to condoms and vasectomies].”

The next step for the research team at Dr. O’Rand’s lab will be to develop an oral version of EP055 that can be tested in humans.

The researchers are reportedly already working toward a “phase one human trial.” If the results of this trial are as promising as the ones from the rhesus macaque trial, EP055 could very well become a viable birth control option for men.

Many public health experts are optimistic that when the male birth control pill does become a reality, it could finally allow men and women to share equal responsibility for pregnancy prevention. Currently, the burden of having to worry about birth control falls almost exclusively on the shoulders of women. In this regard, the introduction of a male birth control pill could have a profoundly positive effect on women’s health as well.